Male delayed ejaculation (DE) is where ejaculation is possible, but with delay of perhaps 25‐30 minutes or more.

The causes of DE are often psychogenic, but there are some cases of organic diseases (diabetes and drug side effects, etc). that cause anejaculation. This is the pathological inability to ejaculate in males, with (orgasmic) or without (anorgasmic) orgasm. Ejaculation and orgasm are two different systems that usually work together, but in fact are separate. E.g. a nocturnal emission or wet dream isn’t with an orgasm. Though these are not die-hard rules, but good guidance 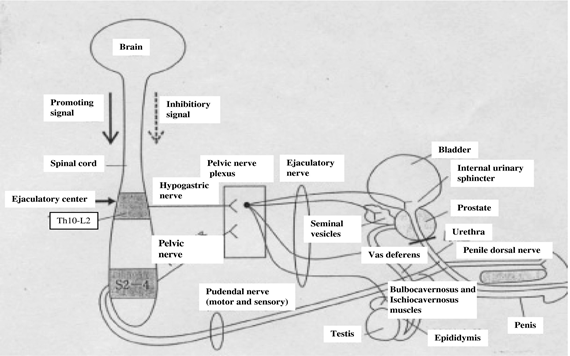 The above slide shows the glorious complication is how the penis works and when the dysfunction cannot be readily explained through a medical diagnosis, it comes to the realm of psycho sexual therapist.

So, how difficult is it to treat delayed ejaculation?

Start with organic and medical in approach, or secondary and through any operations etc. then it’s under psycho sexual and then is it situational i.e. can the individual ejaculate away from the sexual situation that is causing the distress?

In 2017 research demonstrated the first study to address the potential impact of pornography use on ejaculatory dysfunction. It was conducted on a group of 115 hypersexual, predominantly heterosexual men (mean age 41 years, range 19–76 years).

A relatively significant percentage of subjects (23.5%; n = 27) masturbated chronically (at least 1 hour a day or over 7 hours a week), usually whilst viewing pornography.

In comparison with other subjects, this particular group was characterized by a higher anxiety level and was less likely to establish partner relationships or to persevere in them, even if they were established.

These subjects frequently (71%) reported some sexual dysfunctions with delayed ejaculation being reported the most often (in over 30% of cases).

This website uses cookies to improve your experience while you navigate through the website. Out of these cookies, the cookies that are categorized as necessary are stored on your browser as they are essential for the working of basic functionalities of the website. We also use third-party cookies that help us analyze and understand how you use this website. These cookies will be stored in your browser only with your consent. You also have the option to opt-out of these cookies. But opting out of some of these cookies may have an effect on your browsing experience.
Necessary Always Enabled
Necessary cookies are absolutely essential for the website to function properly. This category only includes cookies that ensures basic functionalities and security features of the website. These cookies do not store any personal information.
Non-necessary
Any cookies that may not be particularly necessary for the website to function and is used specifically to collect user personal data via analytics, ads, other embedded contents are termed as non-necessary cookies. It is mandatory to procure user consent prior to running these cookies on your website.
SAVE & ACCEPT